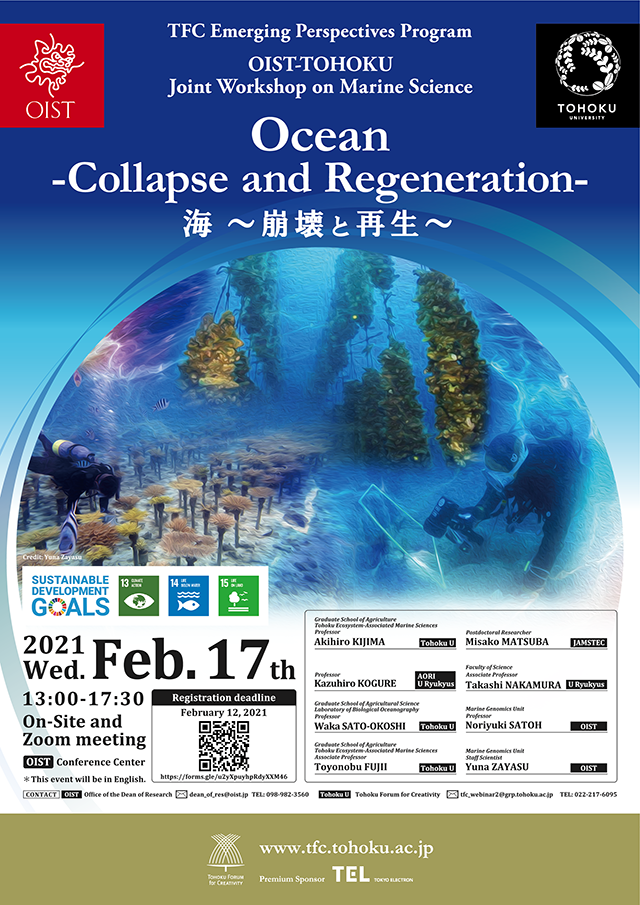 Japan is surrounded by the ocean. Since ancient times, the Japanese people lived harmoniously with the ocean and profited from its wealth. However, due to increasing anthropogenic activity, the environment in the surrounding ocean is deteriorating quickly. Thus it is time to once again discuss the relationship between humans and the earth, especially the oceans, from a researcher’s perspective. Tohoku University (TU) has a long history of studies in the realm of marine sciences and sponsors a number of talented researchers in this field. The Okinawa Institute of Science and Technology Graduate University (OIST) is young, but an increasing number of marine scientists have started their cutting–edge work there. A collaboration will be a great opportunity to learn about each other’s research subjects and techniques. TU and OIST therefore agreed to organize a series of symposia as a starting point for future collaborations in marine sciences.

We selected “Ocean – Collapse and Regeneration” as the title of our first joint workshop. In 2011, the Tohoku area was devastated by a large earthquake and subsequent tsunami. We are still learning more about what exactly happened on the Tohoku coast and how it has regenerated since then. This workshop will provide an opportunity to learn how Tohoku University and TEAMS observed and supported the recovery. Similarly, in 1998 and again in 2016, the coral reefs of Okinawa suffered disastrous damage. Rising surface seawater temperatures lead to the bleaching to death of many corals. Okinawans are now tackling the restoration of the coral reefs, with OIST contributing to the effort. Here we will explore the ways in which scientists are actively engaging the marine problems emerging from both natural and human–caused disasters.

13:25 – 13:45
Kazuhiro Kogure (AORI / Unversity of the Ryukyus)
Oceanographic characteristics of off–Sanriku area and its implication in biological processes

14:15 – 14:35
Toyonobu Fujii (Tohoku University)
Coastal anthropo–ecological system dynamics in response to the occurrence of the 2011 Tohoku earthquake and subsequent tsunami

14:40 – 15:00
Misako Matsuba (JAMSTEC)
Towards sustainable use of offshore marine ecosystems under environmental change –An approach to predicting spatio–temporal distributions of commercial fish

15:30 – 16:00
Takashi Nakamura (University of the Ryukyus)
Mass coral bleaching impacts and recovery in the Anthropocene epoch

Office of the Dean of Research, OIST
Email: dean_of_res*oist.jp (change * to @)