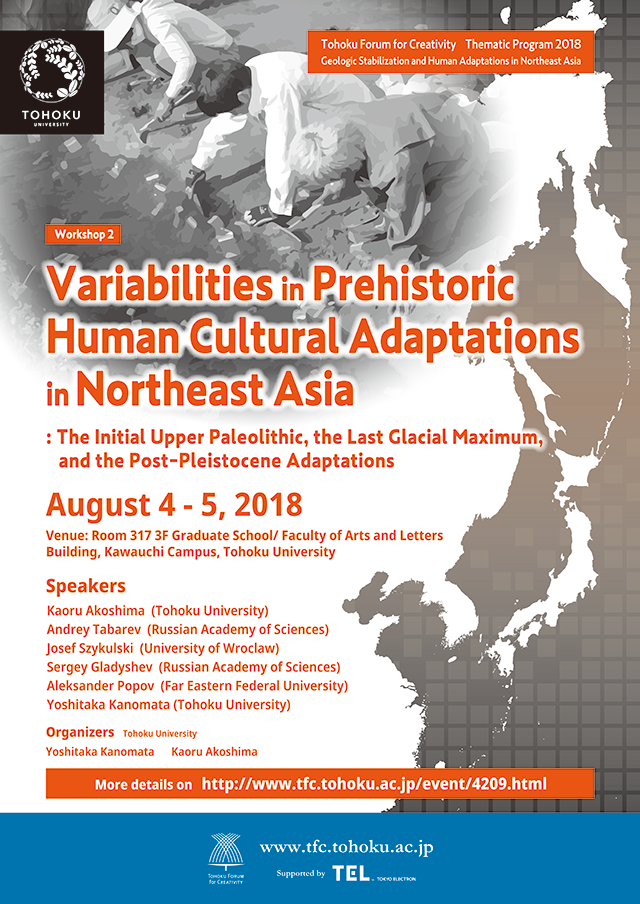 Expansion of modern humans into the arctic landscape during prehistoric times was the complicated processes of interaction between fluctuating environments and diversity in cultural measures of adaptation. The workshop aims to shed light on the territorial expansion of prehistoric populations throughout Northeast Asia, their variabilities in subsistence and technology, and successes and failures in exploitations of natural resources such as game animals, plant crops, and specific geological rock types in the landscape as raw materials for tools in highly mobile settlement patterns. The interdisciplinary program entails specialists in the Far Eastern Paleolithic archaeology, microscopic stone tool analysis, geological landscape, and diachronic environmental reconstructions.
The focus of discussion centers on critical time periods when the strict environments of the arctic placed selection pressures onto human populations with cultural means of adaptations. The Initial Upper Paleolithic (ca.40,000 to 35,000 BP) was the period of transition from the discoidal core based industries toward more efficient blade based industries. Human group mobility increased and selection of certain high quality lithic raw materials, with deepening planning depth of subsistence activities, and symbolic group identification. The last Glacial maximum (LGM) was the period of the harshest cold times in some parts of Northeast Asia. The ever refined systems of cultural adaptation led humans to enlarge their habitats to the arctic and then to the Beringia. The most developed forms of stone tool making technology such as micro-blade production, blade based projectile points with spear throwers, with strict selection of lithic raw materials in the seasonal cycles of human migration, with developed bone/antler tool technology, and artistic representation of figurines. With the abrupt global warming during the terminal Pleistocene placed new selective pressure on human groups in the Northeast Asia. Some populations invented ceramics, some groups intensified in aquatic resources to form shell-middens, some combined hunting with cultivations.
The program thoroughly investigates these complex processes of cultural adaptations throughout Northeast Asian prehistory, from eastern Siberia, the Maritime region, the Japanese Archipelago, and the land bridge area of Beringia to Alaska. The regional archaeological specialists from Russia, Poland and Japan with an interdisciplinary team with geological landscape and environmental reconstruction will decipher the complex processes of human cultural adaptations during the coldest periods in the Quaternary in the coldest region on the earth.

11:00 – 12:00
Andrey Tabarev (Russian Academy of Sciences)
All inclusive (blades, microblades, bifaces): On the variability of the Late Paleolithic Tool-kit in the industries of Mongolia and Russian Far East

13:30 – 14:30
Josef Szykulski (University of Wroclaw)
Late Pleistocene jasper cache from the Arts Bogdyn Nuruu massif in the Gobi Altai Mountains and the problem of its interpretation

14:30 – 15:30
Sergey Gladyshev (Russian Academy of Sciences)
Microcores and microblades as the marker of the Initial and Early Upper Paleolithic complexes manifestation, Mongolia

Next: The Workshop for Variabilities in Prehistoric Human Cultural Adaptations in Northeast Asia, Part2: The Initial Upper Paleolithic, the Last Glacial Maximum, and the Post-Pleistocene Adaptations