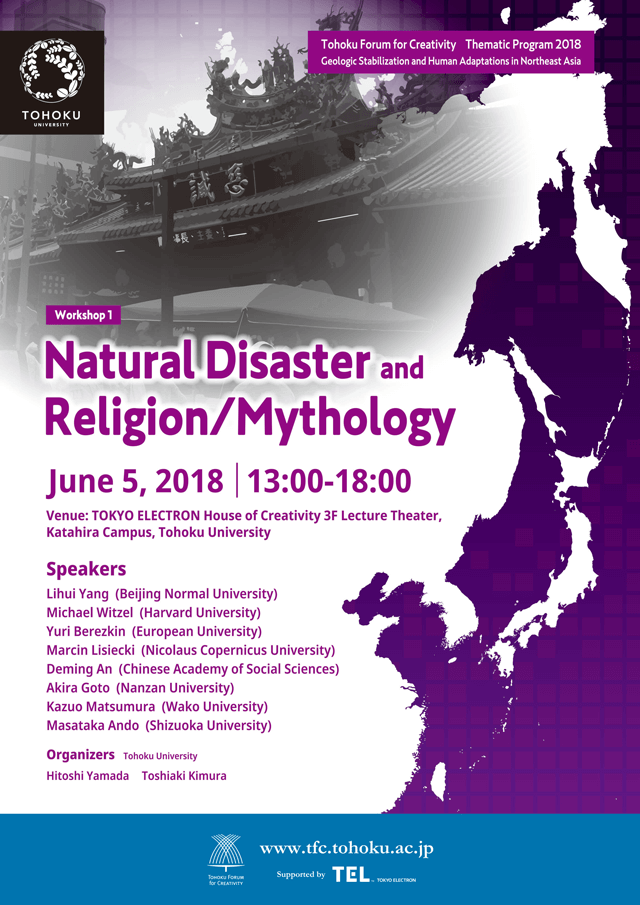 Natural disasters such as earthquake, flood, drought or eruption have been a great threat to the existence of the human beings since beginning. Different measures have been resorted to in time of need including engagements of religious practitioners. In Indonesia as well as in Japan, religious belief has played a significant role after the devastating flood in 2004 and 2011 respectively. The memory of terrible events has been handed down often in form of mythological narratives, thus reminding people of possible preparations and managements. Such was the case in ancient civilizations including China, Mesopotamia, India, Greece, in nonliterate cultures in Siberia, Oceania, Africa, and in contemporary societies like Japan. At least two local legends from Tohoku District recorded in the 20th century have precisely warned against a potential flood and instructed where to find a safe shelter. This local and indigenous knowledge is now being reevaluated from modern scientific methodologies and insights, as potential treasure mine for future policies on environmental management. On this background, this workshop focuses on 1) how religions have coped with natural disasters in terms of belief and practice, 2) how catastrophes have been described in oral narratives as well as in literary sources, 3) how this traditional knowledge can be estimated from modern scientific perspective, and finally 4) what lessons can be drawn from these insights for future environment management.

13:35 – 13:55
Yuri Berezkin (European University)
The A.D. 536 Event and the Folklore/mythological Links between Fennoscandia and the Caucasus

16:20 – 16:40
Deming An (Chinese Academy of Social Sciences)
Interpreting and Approaching the Disaster with Symbolization: Belief and Ritual Practice of Praying for Rain in Villages at Tianshui, Northwest China

17:00 – 17:20
Masataka Ando (Shizuoka University)
Can Myths Tell Us about Past Earthquakes and Tsunamis?

Previous: The 12th The International Conference on Comparative Mythology “Myths of the earth and humankind: Ecology and the end of the world”